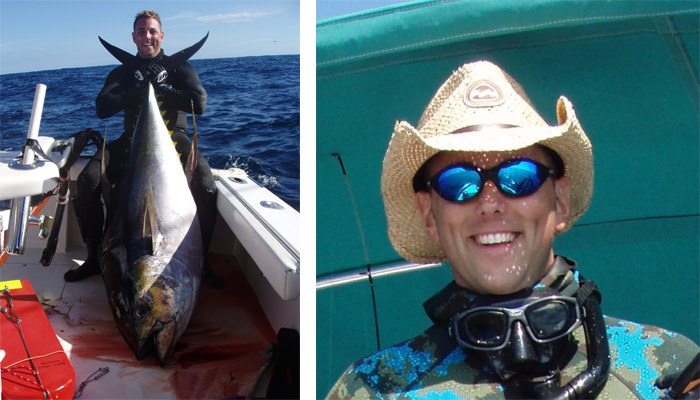 Jerry Guerra has an adventurous spirit and a passion for the ocean and outdoors. He is co-owner Spearfishing Solutions/ Neptonic Systems. A Spearfishing free diving company that designs, manufactures, wholesales and retails, customized spearguns, speargun parts, diving accessories, apparel and more. He was raised minutes from the west coast beaches of Florida. Under the guidance of his father Jerry Sr., with whom he still dives with today, Jerry started free diving the open water by the age of five and was tank diving soon thereafter. His love for the ocean soon became an obsession. His passion for the ocean and outdoors began when he joined the Boy Scouts. There he learned wilderness survival, canoeing, pioneering, backpacking, orientation, and outdoor ethics. While in the Boy Scouts of America he received the highest honor, Eagle Scout, by the age of 17. At age 18 he joined the United States Marine Corps, and became an instructor for Nuclear Chemical and Biological defense, Water Survival, and a combat dive Instructor. He confounded and impressed his associates with his remarkable diving skills, and soon became the lead dive instructor. Jerry completed his military S.C.U.B.A. training with re- breathers, enriched air Nitrox, and Tri-mix, taking him to depths below 280 feet.

Traveling the world as a civilian, Jerry has dove in  California, Louisiana, North Carolina, West Virginia, Mexico, Costa Rica, The Cayman Islands, the Bahamas, Puerto Rico, Ecuador, Belize, Australia, Panama, and Florida's Atlantic and Gulf coasts. Jerry has conditioned himself to hold his breath for over a four-minute period of exertion and over six minutes motionless. This ability takes him to depths over 170 feet without a tank, which allows him to be exposed to larger fish. He considers his greatest achievement this far to be the massive 272-pound Yellow Fin Tuna speared off the coast of Costa Rica in November of 2004. With his aspirations set for world records he continues his quest for the “next big fish”. he uses what the ocean shows him to spawn ideas for new spearfishing gear.